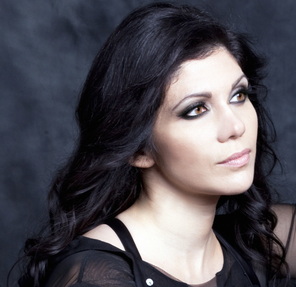 Her voice has been identified mainly with the Byzantine sacred art and has been internationally acclaimed as one of the most important voices in Byzantine Chant and Sacred Music. Having made a remarkable impact around the world with her concerts and discography in Byzantine music, her performances are purely devoted to Byzantine Chant, the Mediterranean primeval musical tradition the religious music in Greek, Romanian, Arabic, Russian, Italian, French, Aramaic (the language of Jesus Christ) etc. The Greek vocalist Nektaria Karantzi has also been invited for Master Classes from some of the most renowned educational and musical centers in Europe, such as the Liszt Academy in Hungary, the Sorbonne University in France, the University of Oviedo in Spain etc.
She is the unique Greek female performer of Byzantine music with discography in Byzantine music since she was fourteen and with active work of chanting as a chorister in church since she was nine.  In her first recordings of chanting she accompanied a contemporary saint, Saint Porphyrios the Kapsokalyvite and with his encouragement she started her studies in Byzantine Music at a very early age. Nektaria Karantzi is also well-known in Greek music stage through her collaboration with the greatest teacher of the Greek Traditional Music Chronis Aidonides. The important moment of her career is her collaboration with the internationally acclaimed pianist, composer and conductor Vassilis Tsabropoulos in an artistic combination inspired by byzantine hymns joining West and East and toured in Europe several times.
She has collaborated with the great traditional singer of Hungary, Marta Sebestyen, the chanter Sister Kassiani, the acclaimed male choir of Budapest “St Ephraim male choir”, under the direction of Tamas Bubno, the Swiss choir of orthodox chant “Choeur Yaroslavl”, under the direction of Yan Greppin, the Metropolitan Symphony Orchestra of Athens, under the direction Vassilis Tsabropoulos, the National Symphony Orchetsra of Skopje, under the direction of Lê Phi Phi etc. She also made the soundtrack of the spiritual serbian film Isceljenje’ (The Healing), by Ivan Jovic.
Some special times of concerts were her participation in the concert at the Theological School of Chalki (Constantinople), under the aegis and presence of the Ecumenical Patriarchate of Constantinople Bartholomew, in the concert tributed to the 70 years of the  Apostolic Diakonia of Church of Greece, at the Athens Concert Hall, under the aegis and presence of blessed Archbishop of Athens and all of Greece, Christodoulos and in the concert for the inauguration of the Athens Cathedral,  Concert for the Inauguration of the Athens Cathedral, under the aegis and presence of blessed Archbishop of Athens and all of Greece, Ieronymos II. Nektaria has also been involved in several television projects, such as the "Epikranthi" series, with byzantine hymns, filmed at the byzantine town of Mystras for the Greek National TV.
She is the Founder and the Honorary President of the “Women in Byzantine Music worldwide Association” and she is the President of the Metropolitan Symphony Orchestra of Athens, which is under the aegis of the Archbishop of Athens and all of Greece, Ieronymos II. She has been honored by the blessed Archbishop of Athens and all of Greece Christodoulos. She also has been honored for her contribution to Byzantine Music by the Byzantine Chanters through the Hellenic Musicological Society –Institute for Byzantine and Greek Traditional Music Studies and the music magazine «To Psaltiri”. She has been honored by the Byzantine Chanters of Rhodes island and the Cultural Association of Vatika and she is honorary member of the Cultural Association of the Peloponnesians of the Rhodes island "Morias". Nektaria has studied Law, undertook postgraduates in Penal Law, Criminology, Ecclesiastical Law and she is also a Doctor of Laws.